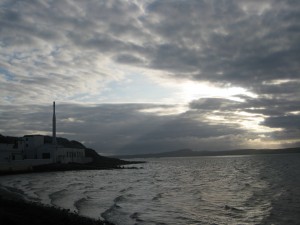 Just back from a press trip to Islay where we were almost miraculously blessed with two days of sunshine. Apparently, it had rained every day during August and most days in September. For the people of Islay, two days of bright, dry weather was like a roll over Lotto win and Christmas coming together.

Still, as numerous distillery employees pointed out, constant rain might not be welcome if you want to do a bit of sightseeing but it did mean that the island’s assorted whisky makers were in no danger of running out of water, as a couple did last year. 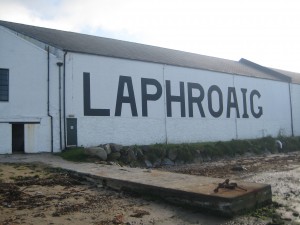 We were on Islay to see Laphroaig and experience two new visitor attractions. Even hardened whisky lovers might find their eyes glazing over a little if they are on their third distillery tour of the day so Laphroaig have come up with something different. Their Source, Peat, Malt Experience takes guests up into the hills above the distillery to see where the water which feeds the whisky comes from.

After that, the tour travels to the distillery’s peat bogs to see how the peat is cut and dried before being burnt to give Laphroaig its distinctive smoky character. Each stage of the trip is accompanied by a healthy nip of different expressions of Laphroaig. Whisky at 10am was a new one for me but I can recommend it.

Next up was a Premium Laphroaig Tasting given by the distillery manager John Campbell. Ranging from the benchmark ten year old up through the expressions to a 30 year old Cairdeas, it was a handy, not to mention economical, way of sampling drams that would be beyond the price range of all but the most fanatical Laphroaig lovers.

While Islay is only twenty minutes from Glasgow by plane, it’s still a bit far to go for a casual dram. Oran Mor, the City Merchant, Stravaigin, The Piper’s Tryst and the Ubiquitous Chip should all be able to help if you are feeling drouthy.

In previous blogs, we’ve wondered which whisky goes best with cheese. That isn’t a problem on Islay where they have blended the two to make this bad boy: 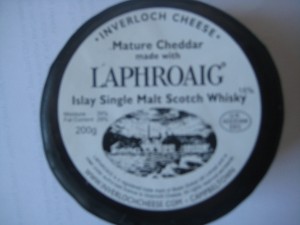 Hot restaurants for a tasty autumn

You can browse and book a wide range of restaurants via 5pm Dining and we've always got new openings as well as old favourites. ...

Treat yourself with a winter getaway

Scotland is beautiful. Dive in with these winter getaways from 5pm Big Deals. ...

Salt Bae's London restaurant charges £630 for a tomahawk steak. 5pm Big Deals would humbly suggest that you can get a great steak for rather less moolah. ...

It's nearly time to dig out the thick, wooly jumpers and coorie in with friends and family. Whether you want a romantic getaway for two or family fun with the kids, these 5pm Big Deals on fantastic lodge breaks make the most of this...