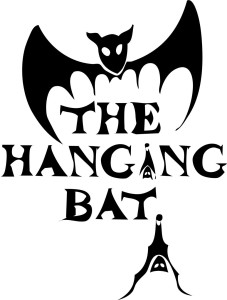 Really not sure about the logo but the 5pm blog likes the look of The Hanging Bat, a new Edinburgh bar which seems in tune with the trend for hip but thoughtful real ale pubs.

The Lothian Road bar is connected to The Waterside Inn in Haddington and local suppliers are to the fore when it comes to their food sourcing. Au Gourmand deli, Crombies the butcher and IJ Mellis all get a mention. Their coffee is being provided by the Java boffins at BrewLab Coffee House.

On the menu, this translates to an offering which, among other things, includes barbecue and hot dogs prepared on the bar’s own smoker and dog griddle.

Beer is the driving force though. They feature six cask and fourteen keg lines plus more than a hundred bottled brews. Over 31 gins don’t sound too bad either. They also seem to offer bespoke brews for private events. Having your own beer for, say, a birthday would put a smile on most blokes’ faces. Interestingly, they don’t serve beer by the pint but by the 1/3 of a pint. You can follow their reasoning here.

Their first Meet The Brewer night takes place on Wednesday 28th November. The full details are here but the Bat will be hosting Summer Wine Brewery who, among other things, make Up Smoke Kriek, an Imperial stout made with cherries and Lapsang Souchong tea.

Glasgow food news to chew over

The 5pm Food blog gets the lowdown on Glasgow's Zinfandel gastrobar and the music-themed Vinyl Bar. ...