What rocked your taste buds in 2012? As we get ready to see in the New Year, the 5pm blog looks back at the foodie stories which made the news over the last twelve months.

The Hilton Glasgow celebrated 20 years in business by launching not one, not two but three new venues. The first to be revealed was Connich, their new, ground floor bar which takes its name from the Gaelic for ‘encounter’. Hot on its heels were Morblas, the hotel’s new restaurant and Ti, an afternoon tea lounge. 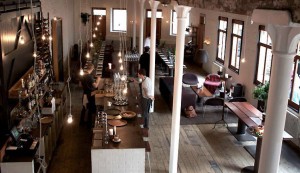 Edinburgh’s Timberyard: one of the most talked about launches in the capital in 2012

In Edinburgh, the Radford family, the people behind the now defunct Atrium and blue, opened their much anticipated new project, Timberyard. The Sunday Herald’s Joanna Blythman liked it. A lot.

‘Revolutionary, game changing, paradigm shifting, however you like to put it, the opening of Timberyard in Edinburgh will shake up the Scottish, even British restaurant scene,’ was the opening line of her review.

The sixth Foodies Festival took place in Edinburgh’s Inverleith Park and, in a year notable for being drookit, enjoyed gorgeous sunshine for most of its three day run.

Less happily, Tony Singh’s Oloroso restaurant closed its doors in August. Check the blog for news of his pop-up in early 2013.

5pm Restaurants also welcomed Sauchiehall Street’s Thairiffic restaurant under the 5pm umbrella. There’s a clue to their cuisine in the name. The new Thai opened in the premises which previously housed the Jade Garden Chinese restaurant and quickly generated a very positive online buzz.

Two of the most significant openings of the year took place in Edinburgh’s Caledonian Hotel, now known as The Caledonian, a Waldorf Astoria Hotel. As part of a major refurbishment, Michelin-starred chefs Jeff and Chris Galvin expanded their operations out from their London power base and opened two new restaurants in the hotel.

Craig Sandle, who previously headed up the Michelin-starred number one restaurant at The Balmoral, is in charge of bringing the Galvin brothers’ recipes to life. The blog ate in The Pomp. It was fantastic.

The Scotsman has in-depth pieces on the hotel’s revamp here, here and, most recently, here. Joanna Blythman gave it an enthusiastic review in the Sunday Herald.

All sorts of strange food preferences were revealed when Glasgow’s famous Rogano featured in a piece in the Record.

On the other side of the world, Finnish restaurant Muru made headlines by opening a pop-up down a mineshaft.

Just a quick link to a brilliant glossary of Scottish foods from a magazine in Sinagapore. It tries desperately hard to be positive but is let down by slightly convoluted English and a forensic description of texture which is more off putting than appealing.

My favourite line comes from their description of black pudding: ‘Small, black and looking relatively harmless, it separates into crumbs easily and tastes like a disturbing mystery.’

Among the restaurants joining 5pm this month were Glasgow’s  Marco Polo on West Nile Street and the legendary Griffin Bar. A more recent arrival is The Libertine, a funky bar in the Merchant City.

This month also saw the re-launch of La Rotunda, a brand new restaurant with an interesting past as explained in this Chewin’ the Fat interview with chef Tony Carbajosa.