The 5pm blog will be taking the next couple of days off but, before we do, here’s our final look back at the culinary events which shaped the blog in the last few months of 2012.

Have a fantastic Hogmanay and we’ll be back the 3rd of January with  a look ahead to what might be on our plates in 2013. 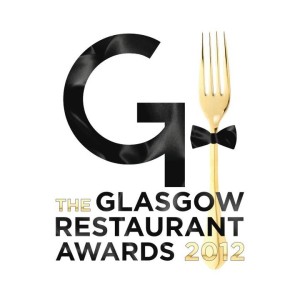 The public voted in their thousands to nominate their favourite city eatery, with over 17,000 votes cast and almost 90 different restaurants put forward.

In total, 27 restaurants made the final three in each of the nine categories open to the public vote. Amongst them were Glasgow institutions such as Rogano and Cafe Gandolfi, but joining them were newcomers to the dining scene such as Lychee Oriental and Cup Tea Lounge.

There was disappointment in Glasgow after Bradford was announced as the Curry Capital of Britain 2012.

Glasgow, which has won the competition four times previously, was pipped to the post by the Bradford restaurants in a tie-break. Both cities had been awarded equal points by the judges but Bradford’s public vote was greater than Glasgow’s and swung the competition in favour of the West Yorkshire city. Boo hiss!

With an all male line-up for the final of the Great British Bake Off , millions of articles were written about men donning their pinnies, sorry, that should read high tech baking protection gear, and getting serious about their choux pastry.

It doesn’t seem all that long ago that real men didn’t even eat quiche. Now there is nothing the nation’s Daves, Kevs and Johns relish more than the prospect of knocking up a Victoria sponge.

According to a new survey of 2000 men and women, conducted by kitchen appliance firm Neff, more men than women are making cupcakes these days. Women have apparently tired of the sugary treat and moved on to new and more exciting cake pastures.

While the idea of domestic male bakers may be relatively new, the survey notes that some doggedly male traits are still present if not correct.

The majority of men questioned think they are already a competent baker. Less than half (48%) of men felt they would need any extra support, in contrast to women who admitted they are not as confident, with 63% saying they would  like lessons to become a better baker.

As is increasingly the norm, the new Michelin Guide was leaked early this year. Scotland maintained its status quo with no-one north of the border winning or losing a star. 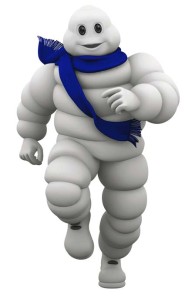 Among the new restaurants welcomed into the 5pm fold were  Glasgow’s Cookery School, The Italian Kitchen and the Italian Caffe , Booly Mardy’s, The Regent Bar and Grill a new Spanish restaurant on Paisley Road West, Casa Olé.

The Hanging Bat opened on Edinburgh’s Lothian Road – the latest in a new wave of hip but thoughtful real ale pubs. They feature six cask and fourteen keg lines plus more than a hundred bottled brews. Over 31 gins don’t sound too bad either. They also seem to offer bespoke brews for private events. Having your own beer for, say, a birthday would put a smile on most blokes’ faces. 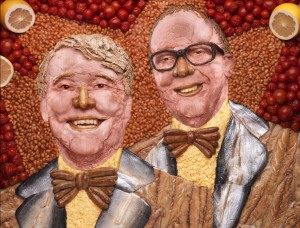 Comedy TV channel Gold launched a new series called Bring Me Morecambe & Wise. It features rare and unseen footage of Britain’s favourite comedy duo alongside the much loved extracts they are most famous for.

They publicised the launch by commissioning a portrait of Morecambe and Wise made out of breakfast foods – an homage to one of their most famous skits.

The lapels on Eric and Ernie’s suits were created from the fillets of 17 smoked mackerel and complemented with stylish 70s jackets made from six kippers. More than two dozen eggs were also employed for the pairs’ shirts – with one half scrambled to recreate the frilly fronts, and the other cooked into an extra buttery omelette to form the retro collars. 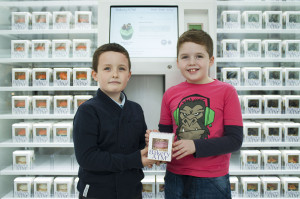 First Beverly Hills and then the St Enoch’s Centre, Glasgow

Where Los Angeles goes, Glasgow follows. Or at least that seems to be what is happening after Bradford’s Bakers unveiled their Bakery ATM in the St Enoch’s Centre.

Earlier this year, Sprinkles Bakery in Beverly Hills launched a cupcake vending machine so that cake-loving Los Angelinos would have access to their dainty snacks 24/7.

Now the family-owned Bradford’s, founded in the south side of Glasgow in 1924, has introduced the concept to the West Coast. 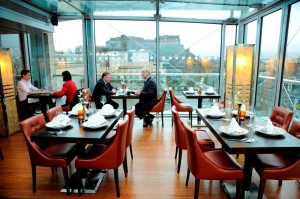 Chaophraya Thai restaurant and the Palm Sugar bar opened in Edinburgh in the rooftop premises on Castle Street which formerly housed Tony Singh’s Oloroso. The Edinburgh restaurant follows in the footsteps of a Glasgow branch which opened earlier this year.

Oloroso was famed for its rooftop views to Edinburgh Castle and to Fife. Chaophraya has improved on them. JMDA, the interior design company leading the extensive refurbishment, created a 16 seat, glass, private dining room allowing diners to enjoy spectacular views of the city while keeping warm in the winter months.

Claude Bosi, chef at the Michelin-starred Hibiscus, was in the news after an ill-tempered outburst on Twitter.

One of Glasgow’s most enduring restaurants,  La Bonne Auberge is 37 this year. The popular French/ Mediterranean brasserie marked the birthday by treating itself to a swish and contemporary new interior. The new look was unveiled just as La Bonne Auberge was shortlisted in the ‘Smart but Casual’ Category at the Glasgow Restaurant Awards.

Do the Twist again 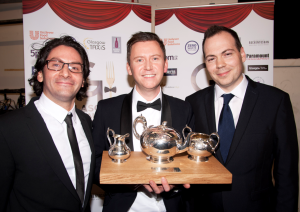 Amarone had a great night at the Glasgow Restaurant Awards

The Glasgow Restaurant Awards were held at the Citz and the prize for Glasgow’s Best Overall Restaurant went to Amarone who also took gold in the Smart but Casual category.

Presenting the winners, Ryan James, chairman of The Glasgow Restaurants Association (GRA), commented: ‘This year’s awards have been highly competitive. Over 17,000 votes were cast by the dining public and the winners fought off some stiff competition to bring home their trophy. These awards demonstrate the culinary diversity that we have in the city and highlight the excellent technical expertise of our industry.

‘Amarone were voted outright winners this year because of the excellent service the staff give their dinners, the creation of a wonderful atmosphere and, of course, for the high quality of the dishes served.’

The full list of winners can be found here.

The ceremony will be remembered for many things. Not least the sight of many of the city’s most well known chefs wiggling onstage to a soundtrack of Sexy and I Know It by LMFAO.

In Glasgow, the two long running Ad Lib restaurants on Hope Street and Ingram Street became members as did an exciting new venture: Rock Lobster in the Merchant City.

It is run by Stephen Bonomi, formerly of Arisaig. A former member of post punk band the Berlin Blondes, Mr Bonomi is still plugged into Glasgow’s music scene and is developing the space downstairs from the restaurant as a burlesque cabaret bar. Dram magazine has a good interview here detailing the Bonomi family history which inspired Rock Lobster.