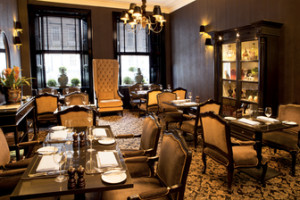 Back in December, the 5pm Restaurants blog mentioned the new restaurant at the Nira Caledonia boutique hotel in Edinburgh’s New Town. Called Blackwood’s Bar & Grill, it launched officially this week.

Blackwood’s is a smart, spacious restaurant that fits in well with the building’s Georgian heritage. The food is just as classic. Scottish produce is very much the order of the day.

We’re talking rare breed pork and lamb from the good people at Peelham Farm in the Borders; free range chicken from Gartmorn Farm in Clackmannanshire; salmon from Loch Duart and dry aged beef from Highland Cattle provided by the Highland Drovers Company.

Typical starers include the crispy West Coast Prawns with wasabi mayo and herb salad or the pheasant, partridge and pigeon terrine with spiced apple chutney and oatcakes.

The kitchen has a charcoal-fulled Josper oven which is used for most of the main courses. Your blogger can recommend the lamb cutlets, pork fillet and beef fillet, all of which have a delicate smoky flavour.

Bar man Robbie Douglas is a good man to know. Obviously, he can whip up cocktails and guide guests through the range of Scottish beers on offer but his true passion is for whisky.

Mr Douglas has a sideline in independent whisky bottlings. Try his 21 year old single grain bottling from North British Distillers. It’s a single cask whisky and a revelation for anyone who thinks that grain whisky must be inferior to single malts.

You can read one fan’s thoughts on the drink here.