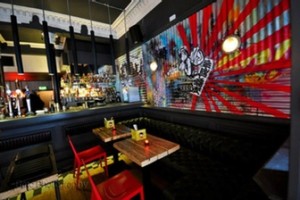 Already a staple of Glasgow’s dining scene, with locations in the City Centre and the West End, Bar Soba has opened its first restaurant in the nation’s capital.

Naturally one of their first priorities was promoting their services on 5pm , offering a two course set menu and a glass of wine for £13.95.

Bar Soba has established its reputation in Glasgow by offering pan-Asian street food from a variety of countries, including Japan, Vietnam and Malaysia.

Its menu is nothing short of adventurous; its unconventional take on burgers, south east Asian curries and California Rolls, as well as favourites such as Pad Thai, Nasi Goreng and Singapore noodles, have kept the diners flocking in.

They also have a mammoth cocktail list which includes variations of classics such as mojitos, daiquiris and martinis, with a few unique offerings added for good measure.

A huge emphasis is placed on cocktails, with the waiting staff ready to suggest the right drink to complement each meal. The restaurants even offer cocktail masterclasses, led by their skilled mixologists.

Only time will tell if it will be as successful as its hugely popular Glasgow sister restaurants.

Book a two course set menu with a glass of wine for £13.95 at Bar Soba Edinburgh through 5pm.[

Some suggestions for celebrating Burns Night. ...

Catch up on some recent openings outside Glasgow and Edinburgh. ...

McLaren's on the Corner is the latest from Signature Pubs Ltd. ...

Ka Pao on Vinicombe Street offers food inspired by the cooking of South East Asia and is brought to Glasgow by the team behind The Ox & Finch. ...