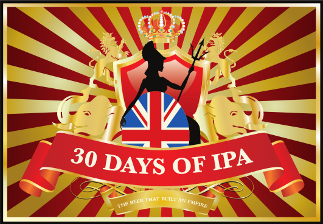 There are lots of fun and games in the pipeline as the 30 Days of IPA event comes on tap this weekend in Edinburgh.

A celebration of the popular Indian Pale Ale style of beer, the festival debuted last year and proved so popular that it’s come back for more.

At its heart, the festival features fifteen varieties of IPA from ten Scottish breweries being sold in eleven of Edinburgh’s pubs over the course of a month.

The festival gets off to a flying start with a Meet the Brewers bash at The Peartree staring from 2pm on Sunday. Most of the brewers involved in the project will be attending, some with some very special beers specifically brewed for the event.

Expect an enlightening afternoon of beer sampling, a fascinating look at some of the raw ingredients and brewing techniques, plenty of chat about the mythology and mystique of beer and a (hopefully) warm and sunny beer garden.

The pubs involved range from traditional Edinburgh bars such as The Bailie to noisy young pups such as Bannermans, the rock and whisky bar. The brewers include Barney’s Beer, Broughton Ales and the Knops Beer Company.

The blog will be returning to the 30 Days of IPA as the festival continues. In particular, look out for news of the Great Edinburgh Beer Experiment – an unpredictable space where beer meets science.

Glasgow food news to chew over

The 5pm Food blog gets the lowdown on Glasgow's Zinfandel gastrobar and the music-themed Vinyl Bar. ...