Their appetites know no bounds – the biscuit corner doesn’t stand a chance when they’re around.

So when Ad Lib in the Merchant City offered 5pm to chance to attempt their Monster Burger Challenge, they were the natural choice to give it a go.

Monster is something of an understatement for Ad Lib’s gut busting burger which contains 3 lbs of Aberdeen Angus beef, 3 beef tomatoes, 2 onions, 2 gherkins, a quarter of a lettuce and 1lb of cheese – the equivalent of 7 regular burgers.

With a menu price of £35, they are willing to offer the Monster Burger for free to anyone who can finish it, as well as a t shirt declaring they completed the challenge.

Both Alan and Michael were convinced they could do it – and both wanted to beat each other.

“I”m looking forward to it,” Michael said, as he took his seat in Ad Lib. “I’m hungry and ready to destroy Michael,” added Alan.

As the burger was being cooked, Ad Lib’s Chee prepped the guys and laid down the rules. ‘You have two hours to finish it,” he told them. “No one can help you and you are not allowed to leave the table. No going to the toilet to make more room.”

He told us about previous diners who had taken on the challenge, several successfully. “One American customer who completed the challenge put water in his burger so it would expand on the plate and not in his stomach. Someone came in from the street unplanned and did it.”

“We’ve had people starving themselves beforehand but that doesn’t work. You never can predict who will take on the challenge and win.”

As the monumental burgers were brought out from the kitchen and placed on the table, the men picked up their cutlery and began. Michael showed he meant business by slicing the burger down the middle while Alan made nibbly cuts around the edges. Alan paused for breath while a confident Michael raced ahead and was the first to finish the first quarter.

“I’m sweating but I don’t feel too bad actually,” he said. Alan reached his quarter shortly afterwards and reckoned Michael had peaked too soon. “I feel not too bad so far,” he said. “I think Michael stormed ahead too quickly.”

Alan’s prediction appeared to be correct. As they continued to conquer the mountain of beef, cheese, veg and bun, Michael began to slow, the crucial halfway mark proving elusive. “I don’t feel full but I feel like if I had another bite my mouth would reject it.” Meanwhile Alan continued to eat and crossed over to the second half. Then, 43 minutes into the challenge, he called it a day.

“I am disappointed,” he said. “I thought I would have got three quarters of the way through at least. The mistake I made was having a break. I should just have kept going.”

Despite being unable to eat another bite, Michael soldiered on. Then at 58 minutes, with slightly less than the burger consumed, he gave up.

“It’s a lot harder than it looks,” he said. “I’m not disappointed. I think I did well.” 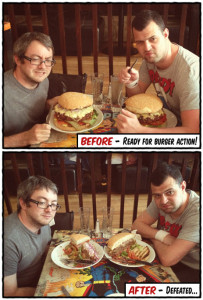 So the winner of the Monster Burger Challenge with slightly more than half of the burger eaten was…… Alan! (Although, technically neither of them were winners as they didn’t finish the whole thing).

A delighted Alan took home the title of the biggest 5pm appetite but not the winner’s t shirt. “I’m please to have beaten Michael,” he said in his victory speech. “But at this moment I feel like I’ll never have another burger in my life.”

Monster Challenge too much for you? Don’t worry, you can order two courses for £13.95 at Ad Lib Merchant City, which includes their delicious California Grill burger. Check out the menu and book online here.