It’s all go on Morrison Street in Edinburgh where two new business are finding their foodie feet. First to open was The Atelier which started welcoming guests way back in July.

We’re not entirely sure how it managed to fly under our foodie radar until now and, in fact, it was a wee review in the latest List which alerted the good folk at the 5pm Dining blog HQ to The Atelier’s existence.

It’s simply furnished and looks as though it all got off the ground on a minimum budget. If the decor lacks frills, the food is rather more sophisticated.

Starters might be the pigeon breast served with Spanish black pudding, spiced pear and ham while a typical main course is the equally terse lamb rack, neck and pressed shoulder, sweet potatoes, greens and confit garlic.

We’d be hard pushed to stick a label on it though. Modern European is the closest we’ve got and that seems a bit vague. There is a sample menu here should you wish to try and pin it down.

What we can tell you, after a recent visit, is that the food is beautifully presented and served in hearty portions.

Stand-out dishes were a pretty starter of scallops and a very good flat iron steak which was incredibly tender. Some reviewers on TripAdvisor suggest that it has been tenderised by a spell of sous-vide cooking before being finished in the pan.

A dish of pork cooked three ways and served with a rib-sticking pot of lentils also hit the spot.

The Atelier is one to watch.

Almost directly across the road is The Priory, a new bar and kitchen with a way-out-there cocktail list.

For example, they have a pop corn Old Fashioned made with Van Winkle bourbon which has been washed with popcorn butter. It’s served sweet and salted.

Steaks, handful of burgers and a concise seafood selection complete the picture. 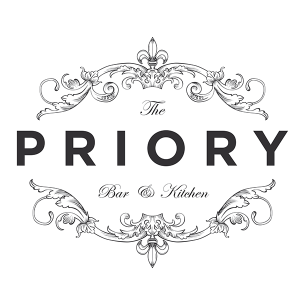