The latest edition of the ever informative Dram magazine is now online.

Among many other fascinating nuggets, the 5pm Dining blog learned of an interesting new project in Milngavie.

Garvie & Co is the new venture on the old Cross Keys site on Station Road. An all day destination which opened earlier this month, it features a bar and restaurant as well as an in-house bakery.

Named after a local lemonade company, the new business is over two levels. At ground level, there are big old windows so that you can watch the world go by.

The upstairs whisky bar has some rather special bottles and the a la carte menu, one of several menus served at Garvie & Co, looks pretty appetising.

The kitchen has a charcoal-fired Josper oven which means the Cairnhill Farm steaks are likely to be something special and we also like the sound of the blackened Cajun chicken which is served with roasted artichoke hearts, grilled peppers and manzanilla olives.

Other dishes that leap out are the Peroni-baked Perthshire lamb; the roasted truffle chicken and the Goan seafood curry with king prawns, salmon and monkfish in a creamy cashew nut sauce.

If you don’t have time for a full sit-down meal then a swing by the bakery counter will reap much in the way of cakey treasures.

Rahul and Pravesh ‘Bubbles’ Randev are the brothers behind the operation. They also have, among others, Oregano Restaurant and Eagle Lodge in Bishopbriggs as well as The Richmond in Glasgow’s West End. 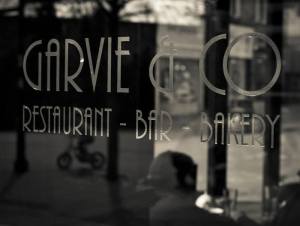