In Edinburgh, Channings Hotel in the West End has just launched its new Shackleton’s Bar and Brasserie.

Named after the Antarctic explorer, Ernest Shackleton, it is filled with old photos of his Polar expeditions along with nautical maps, compasses and ship’s wheels.

The hotel’s Polar connection dates back to the early part of the 20th century when the property on South Learmonth Gardens was Shackleton’s home.

The 5pm Dining blog had a fun evening at Shackleton’s launch last week. In particular, we enjoyed sampling the Mackinlay’s Rare Old Highland Malt which was being given out.

The whisky is a recreation of the original malt whisky which Shackleton carried with him on his 1907 Nimrod Expedition.

The expedition to reach the South Pole was unsuccessful but three cases of the whisky were left buried in the ice at Cape Royds.

These were rediscovered in 2007 and three of the bottles were shipped back to Scotland.

Whyte and Mackay, owners of the Mackinlay brand, decided to try and recreate a spirit which was as close to the original as possible.

Their Master Blender, Richard Paterson, had the original bottles analysed. This established that the whisky had been bottled at 47.3%ABV; that Orkney peat had been used in the malting process and that the spirit had been matured in American white oak sherry casks.

Recreation of the 1907 original

Using malts from distilleries including Tamnavulin, Fettercairn and Glenfarclas, Richard created a faithful version of the 1907 original.

Incidentally, while his men no doubt appreciated a warming nip, Shackleton never tasted the whisky. He was teetotal.

You can taste Mackinlay’s Rare Old Highland Malt in Shackleton’s Bar and Brasserie.

For the full Polar effect, you could wait until a winter storm blows up and take it outside to the garden at Channings. But we wouldn’t recommend that.

Better to enjoy it at the end of a meal at Shackleton’s Bar and Brasserie.

The kitchen serves everything from informal lunches and bar meals to modern British classics on their seasonally changing menus. 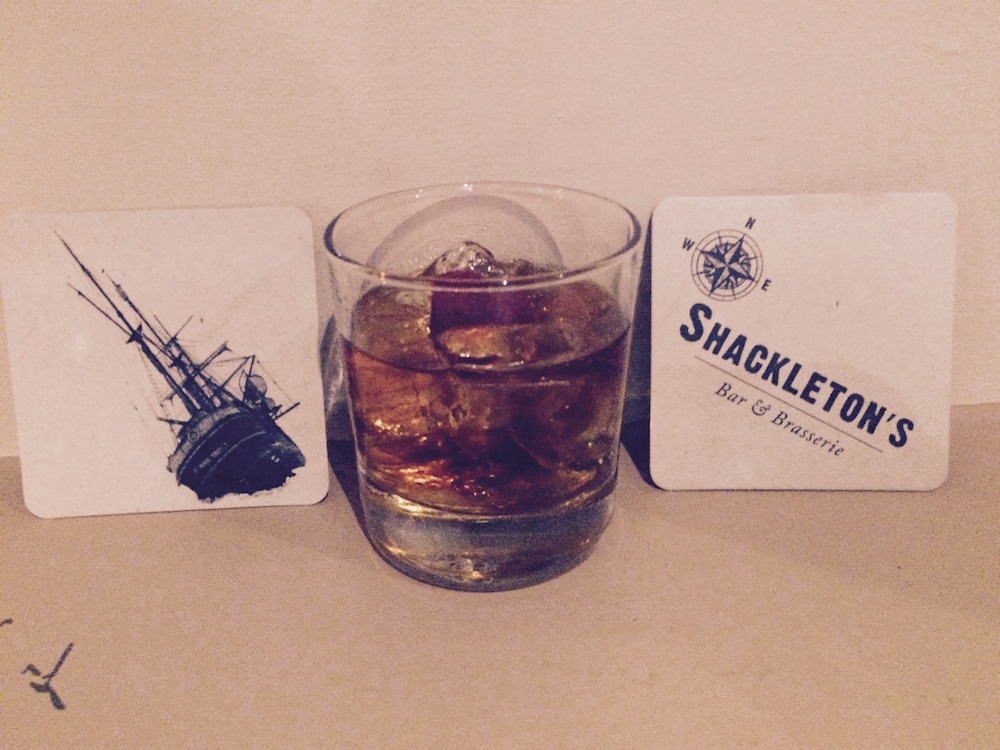