Helen Vass, pastry chef at Glasgow’s Number 16, did just that. In 2013 she quit her job at a Real Estate Asset Management company in Barcelona to focus full time on the passion that had been taking up her after work hours – baking. 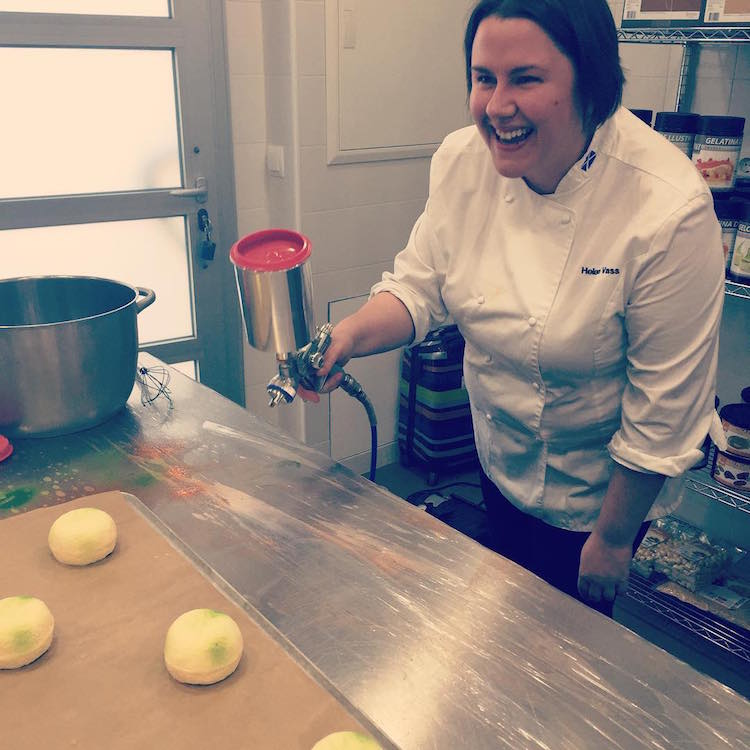 “Before becoming a pastry chef, I got my first class honours degree in Tourism International Travel Management and my postgraduate diploma in Business Administration,” Helen told us. “I always baked as a hobby and it was in 2011 I started thinking about it as a possible career change while working for a Real Estate Asset Management company in Barcelona.”

“It took me two years to make the leap, and in 2013 I moved back to Glasgow to train as a pastry chef at City of Glasgow College.”

After finishing her college course, Helen joined Blythswood Square Hotel to work as a pastry chef, and won a competition run by Marie Claire magazine to be mentored by tv chef Rachel Khoo.

“I won a competition in Marie Claire UK magazine as part of their Inspire and Mentor campaign and Rachel Khoo was my mentor for the year,” Helen said. “She gave me advice to help me achieve my goals and I got the opportunity to do the food styling for her fifth cookbook, Rachel Khoo’s Kitchen Notebook.”

In 2014 Helen moved back to Barcelona where she ran the Escribà Academy pastry and sugarcraft school, part of one of Spain’s oldest patisseries, and worked alongside World Chocolate Master, Jordi Bordas.

“By working alongside a World Champion Pastry Chef, I learned so much. However, one of the most important things I learned from Jordi, was the importance of teamwork. If it hadn’t been for teamwork, he wouldn’t have gone on to winning the 2011 Coupe de Mon de Patisserie in Lyon, and this applies in every kitchen.”

Her exciting career has now taken her back to her home town of Glasgow and Number 16.

Recently, she shared her chocolate brownie recipe with us (and when we brought them back to the 5pm office, several staff members separately told us they were the best brownies they had ever tasted).

“I love working at Number 16 as it is a place where I have had the opportunity to explore my creativity and make people happy with the desserts I make.”

What’s your number one baking tip?

Make sure you have all the ingredients you need for your recipe. It sounds silly but it means you don’t have to nip out to the shops half way through cooking!

What’s your number one piece of cooking equipment?

I love my thermomix! I use it for so many things and it lets me get on with several things at the same time.

Since I moved back to Glasgow in the summer I haven’t had the chance to dine out in Glasgow, although I do hope to change that soon!

Risotto made in my thermomix. In 15 minutes it is cooked and there’s no stirring and chopping involved!

Three ingredients that should be in every kitchen cupboard

What would be your last supper?

I think it would probably include some seafood, cured meats, cheese and bread. And to finish off, something chocolatey.

Do you have a favourite restaurant in the world?

One of my favourite restaurants is Ferran & Albert Adria’s Tickets in Barcelona. The food is incredible and it is an experience. I did a dessert course with the head pastry chef from Tickets and it’s incredible to see the thought behind each dish. Next on my wish list is to visit El Celler de Can Roca in Girona.

What is a cooking mistake you often see people make?

If I am being honest, I don’t focus on the mistakes people make. I prefer to learn from them so I don’t repeat them.

Lorna McNee, head chef at Glasgow's Cail Bruich, has been awarded a Michelin star, the first in Glasgow since 2004. ...

Fin and Grape is a new Edinburgh restaurant which focuses on Scottish seafood and wine. ...

Some more Edinburgh openings and other ghostly goings-on. ...