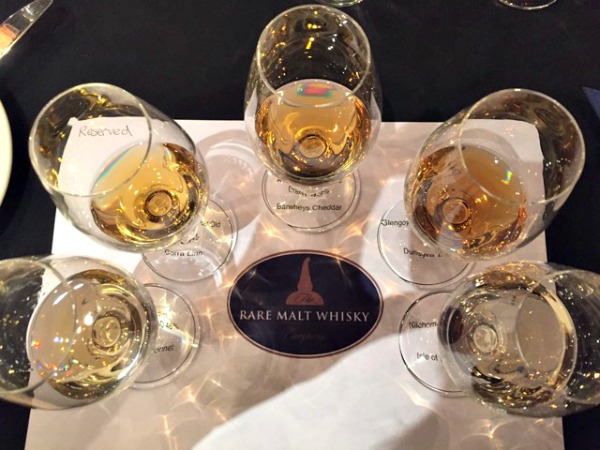 Malt whisky fans should keep an eye out for upcoming events hosted by the Rare Malt Whisky company; the company specialises in sourcing limited edition whiskies and the 5pm blog attended a recent event pairing Scottish whiskies with local artisan cheeses. Who knew such a partnership could be so deliciously beautiful?

Hosted in The Corinthian, The Rare Malt Whisky company’s founder Lesley Henderson was a fantastic hostess who expertly guided us through each of the specially selected whiskies, their characteristics and the complimentary cheeses from Glasgow’s [George Mews Cheese][2].

One of the 5pm blog’s favourite combinations was the Corra Linn cheese (Scotland’s take on Manchego) paired with the Tamdhu 10 year and its caramelly flavours. Other fantastic combinations included Glenmorangie’s ‘A Midwinter Night’s Dram’ with Barwheys Cheddar and Kilchoman Machir Bay with Isle of Mull Cheddar.

We spoke to Lesley about the Rare Malt Whisky company and her experience in the trade.

5pm: What do you think makes Scottish malt whisky so good? 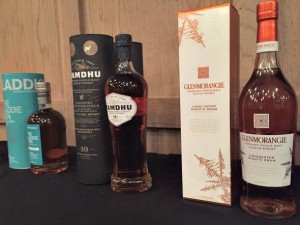 Lesley: In my opinion, it’s the heritage behind it. So many distilleries have been working for 200 years plus. Also, the climate, the water, the air; it’s something engrained in our history, you cannot replicate that anywhere else.

5pm: What’s the most unusual whisky you’ve ever seen?

Lesley: Bruichladdich have done some unusual bottling; they had Andy Murray on a bottle and Harrison Ford on another. I’ve seen unusual maturation in a Barolo cask and Balmoral released one that was entirely port matured. Those are very unusual – you don’t see them regularly at all.

5pm: Where did your enthusiasm and passion for whisky come from?

Lesley: It came from working at Glengoyne Distillery for years plus my dad’s a big fan of whisky. I also regularly visit Islay; that’s helped build up more of my knowledge.

Lesley: That’s just a difficult question, I’m biased because Glengoyne is special to me. I also love the Islay whiskies for the characteristics of the island but some of the smoky ones are too much. The Tamdhu 10 year old is one of my favourite ‘go to’ drams. The Glencoyne 21 year old is also great for special occasions like Christmas with the family, by the fire.

The Rare Malt Whisky company has an upcoming event that you can buy discounted tickets for via the 5pm Big Deal here – a great gift for Valentine’s.