Last weekend, after a very enjoyable lunch at the recently opened Wee Restaurant on Edinburgh’s Frederick Street, the 5pm Dining blog found itself sauntering along Castle Street. Next to the Thomas Pink shirt shop we spotted the split new Badger & Co.

A bar and kitchen, we thought it wasn’t due to open until Monday but their builders and fitters must have got ahead of the game.

Wind in the Willows link

I tried to persuade my other half that nipping in for a snackette wouldn’t be a terrible thing but was reminded that it is only recently that I have shaken off the Two Lunch Trew nickname – the result of a terrible misunderstanding some years ago. So, while I can’t bring you first-hand, scoffing knowledge of Badger & Co, it all looked interesting.

The name and the slightly surreal, retro feel of the place is due to the fact that the Castle Street premises were once home to Kenneth Grahame, author of The Wind in the Willows. The 1908 children’s novel related the adventures of Mr Toad, Mr Badger, Ratty and Vole.

The owners have taken this nugget and run with it. In terms of the decor, it means padded leather seats, chandeliers and wood panelled walls. 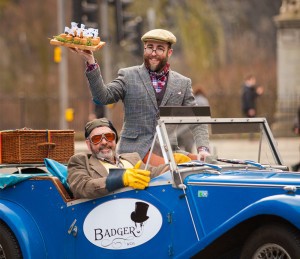 There are deer heads wearing wigs mounted on the walls along with yellowing, vintage copies of The Scotsman and Daily Express. One picture shows a well dressed badger riding a penny farthing. It’s what a 21st century hipster might imagine an Edwardian gentleman’s club would have looked like.

The food continues in the same vein – traditional but with a quirk. This means that the starter of pan-seared ox tongue is served with wilted greens and a fashionable horse radish bon bon. There is a daily pie selection which includes a chicken and leek version topped with Moroccan feuille de brick pastry.

Of course, the desserts include jelly and ice cream. Obviously, we’re talking elderflower jelly with poached pears and vanilla ice cream rather than a block of supermarket jelly with Wall’s Soft Scoop. Were Badger & Co a supermarket, it would be Waitrose or Ocado rather than Tesco or Sainsburys.

I don’t know if the Badger & Co team deliberately set out to target the New Town market but I imagine that this menu hits it right between the eyes.

If the food offer is very New Town, the drinks offer is in keeping with the adjacent George Street circuit.

The first item on the cocktail menu is the Badger’s Burrow – a mix of Courvoisier Exclusif VSOP, Dalmore 12-year-old, Grand Marnier, plum and chocolate. Yours for a tenner. The beer list includes First World Problems from Stewart Brewing at £5.50 a pint.

We wish them every success.