Here at 5pm Dining, we see the popularity of the video clips on our Facebook page and YouTube channel. We know that there is a huge appetite for food prep films and cookery demo vids.

While our short films tend to feature local chefs demoing the gorgeous dishes they prepare for their customers, other online channels attract an audience by showing quick and easy recipes which any home cook could pull off.

One of them, Twisted, has looked back over the last seven decades and pulled together a timeline which looks at how cookery shows have evolved since the first British cookery programme was broadcast in 1946.

My oh my, things have changed.

Mr Harben was an exception in an era when these early, traditional homemaking programmes were hosted almost exclusively by women. They turned people such as Marguerite Patten and Fanny Cradock into household names.

Filmed from an eye-level angle, food videos during this period commonly addressed the audience directly and were characterised by long-winded cooking instructions.

Male chefs began to enter the TV kitchens. Men always had, and still do, make up the majority of the workforce in professional kitchens. However, back in 1982, men who did the bulk of the domestic cooking were a minority.

Chefs such as Keith Floyd – known for cooking with a glass of wine in one hand and a whisk in the other – took cooking out of the home kitchen and experimented with cookery shows which placed more value on entertainment than had been the case previously.

Travel begins to play a more integral part, with cooking shows set on a fishing vessel in rough seas or in the kitchen of a restaurant in Provence. The location and personality of the chef was the centre piece of the show, over the food.

The access to international locations meant that these cultural experiences had a growing influence on household cooking in the UK. With more ingredients being imported to the UK from all over the world, Madhur Jaffrey brought Indian food to the western world with her show Madhur Jaffrey’s Indian Cookery.

From the Two Fat Ladies to Ainsley Harriott, Gordon Ramsay and the entrance of Jamie Oliver as the Naked Chef, the mid-Nineties were perhaps the heyday of TV personality cooking.

The chummy presentation gives a sense of the TV host’s character and often provides insight into their personal lives as well as their style of cooking.

Jamie Oliver championed home cooking but with fresh, organic ingredients, all whizzed along by his cheeky chappy character and bish bash bosh enthusiasm.

The programmes from this era are often humorous and focus heavily on the celebrity chef. Perhaps even more than on the food and the cooking itself.

Nigella Lawson enters our TV screens and makes cooking sexy. From her husky tones to the flirtatious way she licks her fingers when preparing her dishes, there is little doubt she is bringing something new to the world of food on film.

Although Ready, Steady, Cook had been on air since 1994, a new wave of competition cook-offs began around a decade ago and viewers can’t get enough. Last year, Great British Bake Off’s finale won an overnight viewing figure of 12.29 million. At the time, it was the highest viewing figure of the year for a non-sporting event on UK TV.

These shows focus on what we are endlessly told is the journey of the characters. In many senses, the food is an extra. The format provokes investment in the characters and builds drama and suspense as the audience waits to hear if their favourite has made it through to the next stage.

These shows marked the introduction of everyday people among the TV chefs. These Ordinary Joe members of the public provide a new level of relatability for the audience. At the same time, the celebrity names who act as judges and hosts provide familiarity, expertise and recognition factor.

As bloggers and vloggers established themselves, we saw the entrance of a new style of food film delivered on an entirely new platform. Relatable and engaging, these were and are cooking shows created by everyday people, for everyday people.

Complex TV production skills were no longer needed and content was reduced to less than 30 minutes.

The blogs and vlogs provide fantastic opportunities for people to commercialise themselves. A prime example would be Joe Wicks – one of Britain’s biggest selling online cooking personalities with more than 1.2m followers on his various social channels. 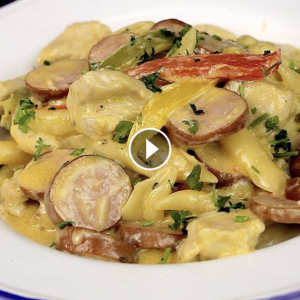 Today’s consumers prefer recipes designed to be made at home with simple ingredients and tools rather than copying other peoples’ styles. This is where the POV angle comes in. It allows people to place themselves in the videos – making it all about the viewer, not just about the food.

Fancy a bit of posh?

Hop over to The Rabbit in Troon and more

Looking for new dining options in Troon, Finnieston or the Southside? As always, the 5pm Food blog has got 'em. ...

Gin festival or Dachshund Disco? Or both?

Ever wondered what gin sounds like? Or what happens at a Dachshund Disco? Us neither but now is the chance to answer these burning questions. ...

Check the latest additions to 5pm's roster of Glasgow restaurants

Glasgow's Gōst, Gaucho and Finsbay Flatiron can all now be booked via 5pm Dining. ...