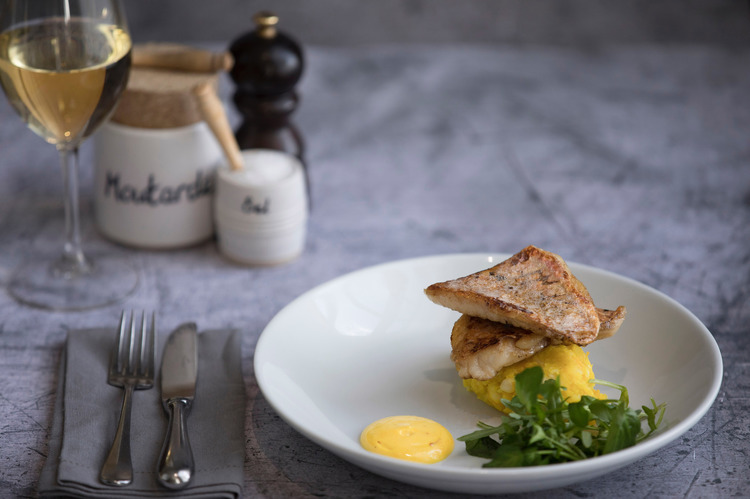 In the latest our occasional Chewin' the fat series of interviews, we chat with Benjamin Bel of Hotel du Vin in Edinburgh.

Benjamin Bel became the General Manager of Edinburgh's Hotel du Vin in January. He has more than 20 years experience in the hospitality and catering industry. Along with stints in his native France, he has worked extensively in England and Scotland. As well as opening Japanese restaurants in London and Paris, he recently worked at the Malmaison in Aberdeen and catered for the athlete's village at the 2014 Commonwealth Games.

The Hotel du Vin in Edinburgh has an interesting history. Originally a poorhouse, then an 18th century asylum, and a science lab, the building is now a boutique hotel with 47 distinct rooms, a courtyard with cigar bothy, whisky snug and bistro.

Ben took over the hotel just as Hotel du Vin began to refocus its menu on classic French bistro dishes. We had lunch with Ben to hear about all the new developments.

Hotel du Vin Edinburgh can be booked via 5pm Dining. You can try the spring prix fixe menu with this offer:

£39 per couple for 2 courses each on the prix fixe menu. Includes a bottle of Hotel du Vin Merlot or Chardonnay.

We also have a Big Deal running until the 14th of July. £32 for two people to enjoy a glass of Hotel du Vin Lombard & Co Cuvée Champagne and a two course lunch from the prix fixe menu.

It is available Monday to Saturday from early May to the 14th July. 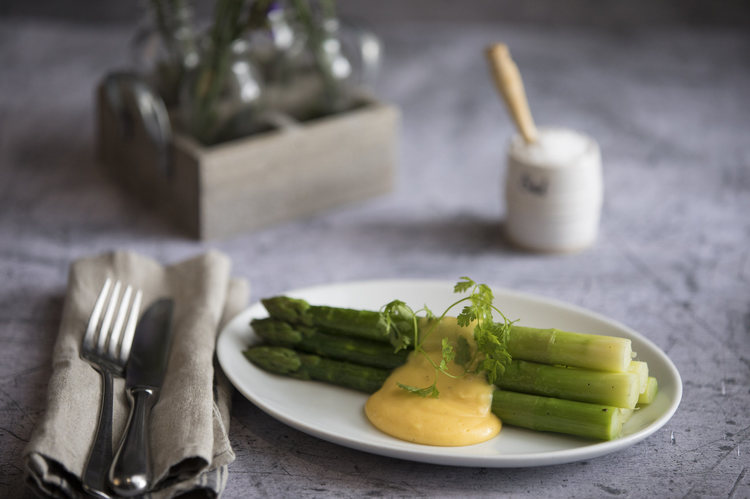 The prix fixe menu changes every three months and showcases seasonal ingredients such as asparagus.

5pm: Tell us about the new menu at HdV.

Ben: We want our customers to feel that they are having a French dining experience. The menu is not a Scottish interpretation of French food. It is French bistro food. The ingredients are very good quality and we cook them well but simply. The dishes are traditional French bistro classics such as cassoulet, roast cod on Puy lentils; onion soup and crème brulée. There are steak frites, moules frites and, of course, snails in garlic and parsley butter.

5pm: The menu has several sections. Can you talk us through them?

Ben: It is designed to suit all occasions. There is the à la carte for lunch and dinner  but there is also a selection of lighter, all day dishes. Things like a croque monsieur; a saucisson baguette, eggs Florentine or an omelette - dishes for when you are pressed for time or just want something light.

We also have our prix fixe menu. This changes every three months and starts at £17.95 for two courses at lunch. This menu reflects the seasonal produce available so, for example, the current menu has Wye Valley asparagus with Hollandaise sauce.

There is an al fresco menu for people who want to eat in the courtyard and we have heaters should the summer be not quite as warm as we might hope.

We also do our Sunday brunches. These are lively, family-friendly occasions and very chilled out. There is a live musician every second Sunday and that seems very popular.

In time, we will start to do daily specials written up on a  blackboard. It doesn't get any more French bistro than that.

5pm: Can you tell us a little about the vin part of Hotel du Vin?

Ben: At the last count, we have 216 bins with 30 odd wines by the glass and four Champagnes. The sommelier, Sandor Molnar, is at the front of the show. His job is to listen to our diners and, where it is wanted, give guidance and advice. It is about judging how much interaction people want.

We also do a monthly wine dinner and, for the summer, we are arranging a Fun with Bubbles event in June. (See outro for details) 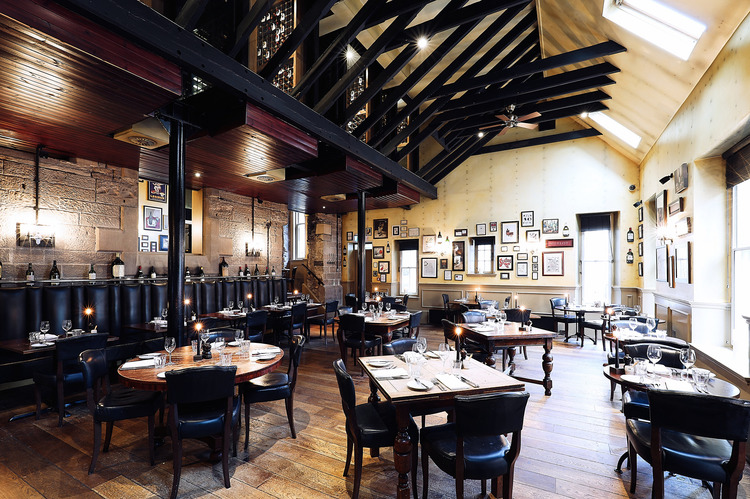 The dining room at Hotel du Vin is decorated with wine merchant memorabilia.

5pm: Do you think that hotel restaurants have to fight that little bit harder to be recognised?

Ben: Perhaps in the past but it is changing. What we are doing is putting the bistro at the front of the hotel. We want to be seen as a bistro with a hotel rather than a hotel with a bistro.

Our customer base reflects that. We have a great location in the heart of the Old Town and in the heart of the community here. Around 70% of our business comes from local people rather than travelling guests. We are working hard to ensure that our service is consistent. We know our regular diners by name and we get to know their preferences. That consistency is important.

5pm: How did you get started in the hospitality business?

Ben: I started at the age of fourteen in Rouen, Normandy. I had a weekend and summer job making coffees at a hotel. I stayed at school and did my exams but when you are seventeen and earning your own money... that is something else. Especially when compared to your friends, you are only the one with a little bit of money in his pocket. Very quickly, you become a little more independent. And then you want to travel.

I took the boat to England as I wanted to improve my English. I moved back and forth between hotel and restaurant manager jobs in France and the UK. At some point, I did my catering degree and here we are.

I was lucky enough to be allowed to do what I wanted which doesn't always happen. When you turn around to your middle class French family and say, 'I want to be a waiter for a career' then your Dad may ask if you really think that is a good idea. 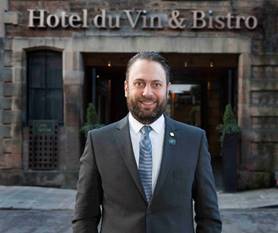 5pm: You have seen the food culture in the UK and France. Are they that different?

Ben: When I first came here in 1994, I think it is safe to say that not everybody really knew very much about French food. That has all changed. It is very easy for people to go to France now. When I first came to the UK, it took me three days to get to Bath via train, boat and two more trains. Cheap flights have changed that. British people don't just know what French cooking is, they are understanding the regional differences.

When I was growing up, eating together was a big part of family life. My father was an incredibly good cook. Nothing to do with his job. He was a banker but he loved cooking and wanted to share that passion. We all had to be together at the family table once a day. We had a big family. I have three sisters and dinner might take two or three hours. The sharing was important. The sense of conviviality was very important. It means that you associate a good time with food.

5pm: Is that something you want to encourage at the bistro?

Ben: Absolutely. For me, happy memories are associated with food and I want to create happy memories for our customers. We want it to be a relaxed experience. I don't usually wear a tie. I don't want any stiffness when people come for a meal here. We have The XX on the sound system. It's chilled but with good service and proper French bistro food. We want to foster a real sense of conviviality.

5pm: What is the best thing about working in this industry?

Ben: The people. Different customers and different staff have different expectations, needs and requirements. I like getting to know that and manage it. I enjoy having to adapt. With our staff, it is about sharing and training and teaching. Sharing your experience and passing it on. I love it when people come in to work here for, say, the summer and they discover that they love it and stay on.

5pm: You have a magic wand. What would you change about the industry?

Ben: There is a British concept - and it's a historical attitude - that serving people is beneath you. There is an idea that we like to be served but we don't want to serve. We need to break that conception. The hospitality industry is not about service in the sense of being servile. It is about delivery. It is about passion. I am not a servant. I deliver what we promise.

Ben: Dad would cook a daube of venison. He had that spot on. We had it for Christmas once. It was out of this world. The family was all there. I would love to do that again.

I've eaten at Ducasse at The Dorchester and I was at Tom Kitchin six months after he opened. I was at Gleneagles last month. All of them were great but if I could have any meal, it would be that daube of venison with my family because of everything that it means to me.

Hotel du Vin Edinburgh is hosting a Portuguese wine dinner on Thursday 24th May 2018, 6.30pm. It costs £55 per person including arrival drink with canapés and five course dinner paired with wines.

Fun With Bubbles takes place on Thursday 28th June, 6.30pm. Tickets are £45 per person. Weather permitting, Hotel Du Vin sommelier, Sandor Molnar, will be in the courtyard with a range of sparkling wines from the Old and New World. From Crémant to Champagne, guests can look forward to a sparkling wine journey while enjoying the chef's seasonal canapés. 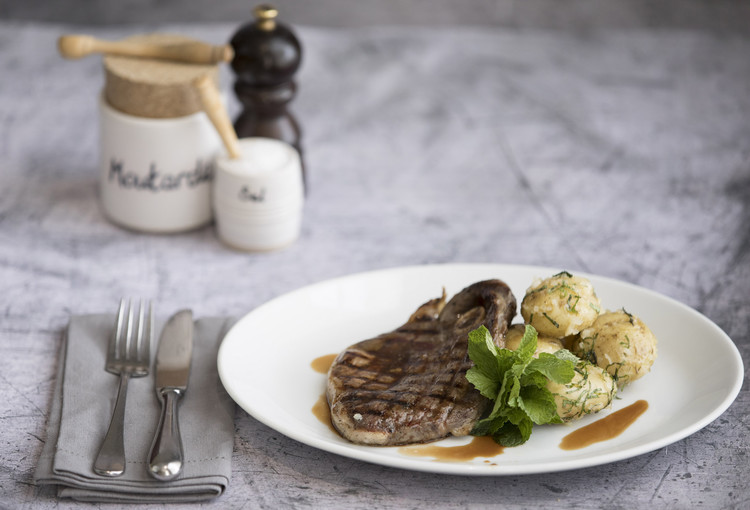 Lamb gigot is on the current a la carte menu at Hotel du Vin in Edinburgh.