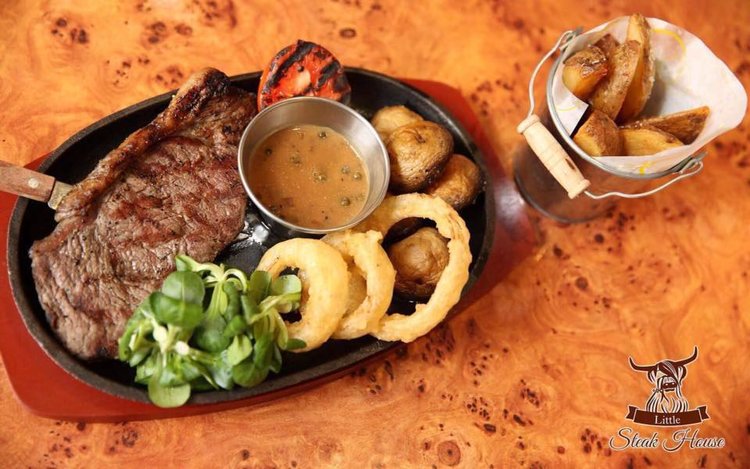 Scotch beef is on the menu at the Little Steakhouse and Wine Bar in Kilmarnock. Pic: Facebook.

Sometimes, all you want is a good steak. So say 'Hello' to the Little Steakhouse & Wine Bar, a new venue in Kilmarnock.

The sister restaurant to the Little Steakhouse in Paisley, the Kilmarnock restaurant opened on London Road in June.

The new venue serves two of our favourite things - 'quality Scottish beef and the finest wines from one of Scotland’s leading wine merchants'.

Along with lots of edible beefy delights, the Little Steakhouse & Wine Bar also features a specially commissioned piece of artwork - McCoo the Highland cow. McCoo has been painted by Kilmarnock artist Steven Brown.

The restaurant sits in the premises previously occupied by Franklin and Sloane and then Dapper Squirrel. It is just us or does Dapper Squirrel sound as though he might be a Love Island contestant?

Anyway, as the restaurant name implies, the Little Steakhouse serves a wide range of steaks ranging from a 10oz rump to a 20oz Chateaubriand to share.

All their beef is locally sourced Scotch beef which has been aged for 21 to 28 days.

The steaks come with hand cut chips or diners can choose between mash, mushrooms, tomatoes and fresh onion rings cooked in batter. Of course, you can add sauces or go wild and order up some king prawns for a luxurious take on surf and turf.

Steaks are not the only meal on the menu. Fajitas, burgers, steak pies, ribs, three cheese pastas, half lobsters and a mighty warrior haggis also make an appearance.

The restaurant has two outdoor areas and the 5pm Dining blog understands that there are plans for a barbeque so that customers can see their steaks cooked in front of them.

Given that the good weather is forecast to continue for the foreseeable future, we suspect that the Little Steakhouse & Wine Bar could become one of Killie's al fresco hotspots.